During the early 90s, the Internet was not such a large part of our lives.

Today we can almost run our entire lives on the Internet.

The number of Federal Website Accessibility Lawsuits Almost Tripled in 2018, according to Seyfarth Shaw. The largest majority of those cases (96%) were filed in Florida and New York.+

People with disabilities have filed lawsuits against businesses both large and small when the websites were not coded property to work with the assistive technology they use, such as screen readers, keyboard only navigation, color contrast and others that are needed for them to use the website like others who are not disabled.

Title III of the ADA prohibits discrimination on the basis of disability in the activities of places of public accommodation. ADA.gov lists 12 categories found in the ADA such as restaurants, movie theaters, schools, day care facilities, recreation facilities and doctors’ offices. 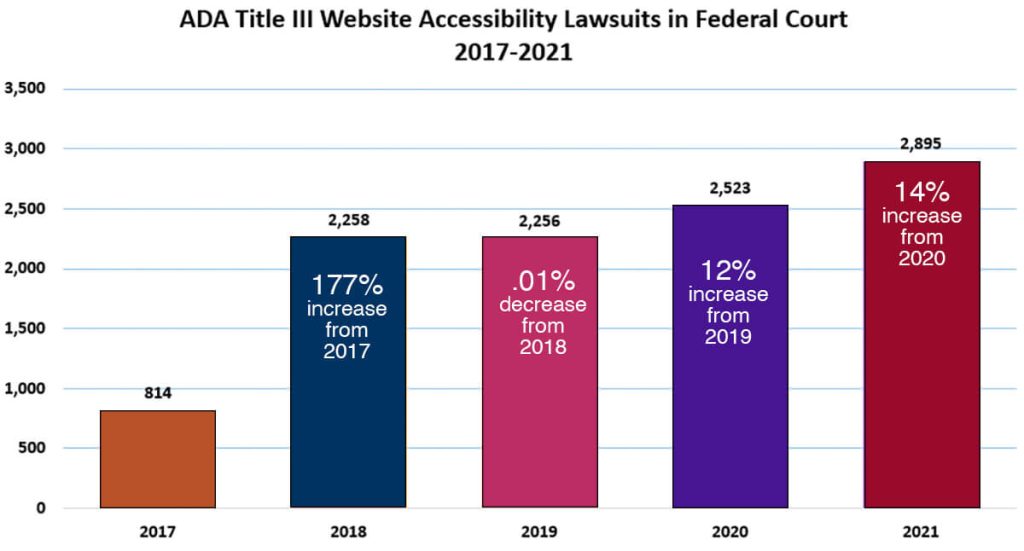 In 2021, online stores have been noted to being a target for website accessibility.

There are six main industries who are being hit the hardest as noted by UsableNet: retail, food service, travel and hospitality, banking and financial, entertainment and leisure and self-service.

In 2016, a landmark case Gil v. Winn-Dixie Stores was found to have violated the ADA because its website was not accessible to the blind plaintiff.  Mr. Gil was wanting to use the website to fill prescriptions and to locate coupons. Winn-Dixie was ordered to update its website.  The court held that only websites with “nexus” – a link to a physical location are subject to the ADA.

Although the Winn-Dixie case was tied to a physical location having a website, other cases have been decided for the plaintiff that only has an online presence. With no true written law in place for website accessibility, courts are deciding the cases most often, in favor of the plaintiff.

In April 2016, NetFlix agreed to add audio descriptions to the soundtrack of video that describes important visual details that cannot be understand by viewers who are blind.

The Judge made the statement below.

The department of Justice also made a statement in favor of having ADA Tile III applied to technology:

“[W]hile such web-based services [as Netflix streaming video[ did not exist when the ADA was passed in 1990 and, thus, could not have been explicitly included in the Act, the legislative history of the ADA makes clear that Congress intended the ADA to be adapt to changes in technology. See, e.g. H.R. Rep. 101-485 (II), at 108 (1990) (“[T[he Committee intends that the types of accommodation and services provided to individuals with disabilities, under all the titles of this bill, should keep pace with the rapidly changing technology of the times.”).”

“Defendant Netflix is a public accommodation that offers its Watch Instantly and other services to the public. As such, Netflix is subject to Title III of the ADA, even it if has no physical structure.”

Statement of Interest of the United States Department of Justice in NAD v. Netflix (page 4)

There are many notable cases for those who do not have physical structure. A few are below.

What does it cost if you are not accessible? There are fines in place for Section 504/Section 508. But, for those who have received a demand letter for settlement or have been sued under the ADA Title III, the costs extend to court fees, attorney fees and settlements and the requirement of making their website accessible.

A Twitter thread by Jared Spool, applauded the court’s actions in Robles v. Dominos. This case was first tossed out of court, but in the appeals court, the ruling was revered saying that the ADA covers website and mobile application and so the case was relevant. Jared tweeted his opinion regarding applying accessibility to digital assists.

What Are The Standards for Accessible Websites

The W3C has created the Web Accessibility Initiative (WAI) to develop Web Content Accessibility Guidelines (WCAG).  The WAI brings together people from around the globe from industries, disability organizations, government & research labs to develop guidelines and resources to help make the web accessible to people with disabilities including auditory, cognitive, neurological, physical, speech, and visual disabilities.

The goal is to provide a single shared standard for web content accessibility to meet the needs of individuals, organizations, and governments internationally.

This initiative (WAI) has developed a set of technical documents and guidelines to provide a single shared standard for web content accessibility that meets the needs of individuals, organizations and governments internationally. They are called the Web Content Accessibility Guidelines WCAG. The most current version of the guidelines is called WCAG 2.0 with WCAG 2.1 currently in development and is scheduled to be published as a standard in 2018.

Where do you start with accessibility?

If you have received a demand letter, or a notification of a legal lawsuit, contact an attorney who is an expert in accessibility, such as Seyfarth Shaw.

Then, get to work making your website accessible. The best place to start is with a website assessment and accessibility audit. This will provide you with a high level what is needed to bring your website up to the WCGA 2.1 standards. With an assessment of your current website, you will have the knowledge of what issues are present and what changes should be implemented for ADA compliance. 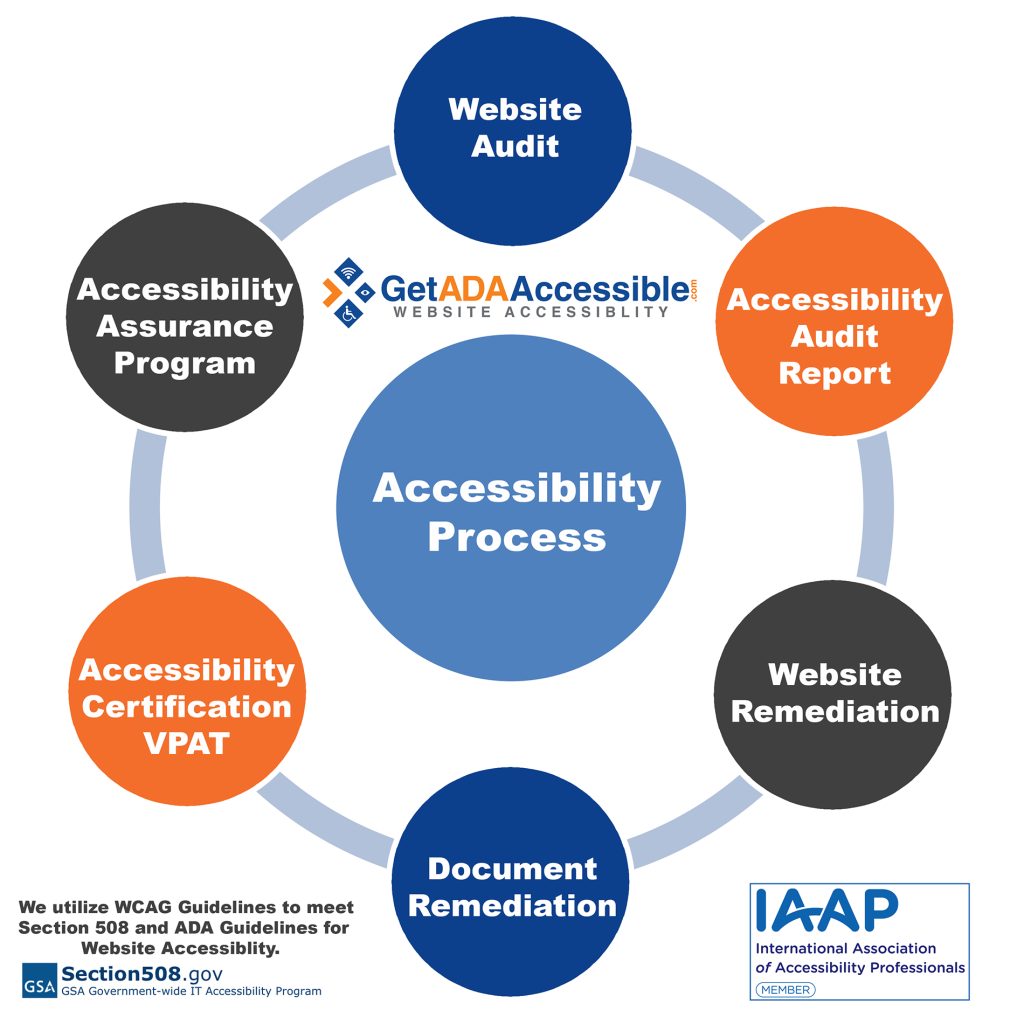 If you have a development team, they will be able to use the audit to format the code on your website, images, videos, multi-media, documents and PDFs into compliance by remediating your website or GetADAAccessible.com can perform the remediations.

A VPAT report will provide details on the website’s accessibility that can be shared with those who have an interest in providing proof of accessibility.

If after reviewing your audit, and your current website cannot be remediated, we have a full development team who will develop a new ADA compliant website and remediate your online documents and PDFs.

GetADAaccessible.com provides monitoring and maintenance of your website for those who add new content. This ensures your website continues to be in compliance with all WCAG 2.0 rules. Should you wish to maintain your own website, we also provide resources for training your team.

Accessibility testing and remediation is not a quick band-aid with a plugin or an overlay on your website.

We’ve tested many overlays that have a button to click for accessibility. Although they look like they may be fixing the accessibility issue, we have found they just do not provide the needed accessibility to meet guidelines. 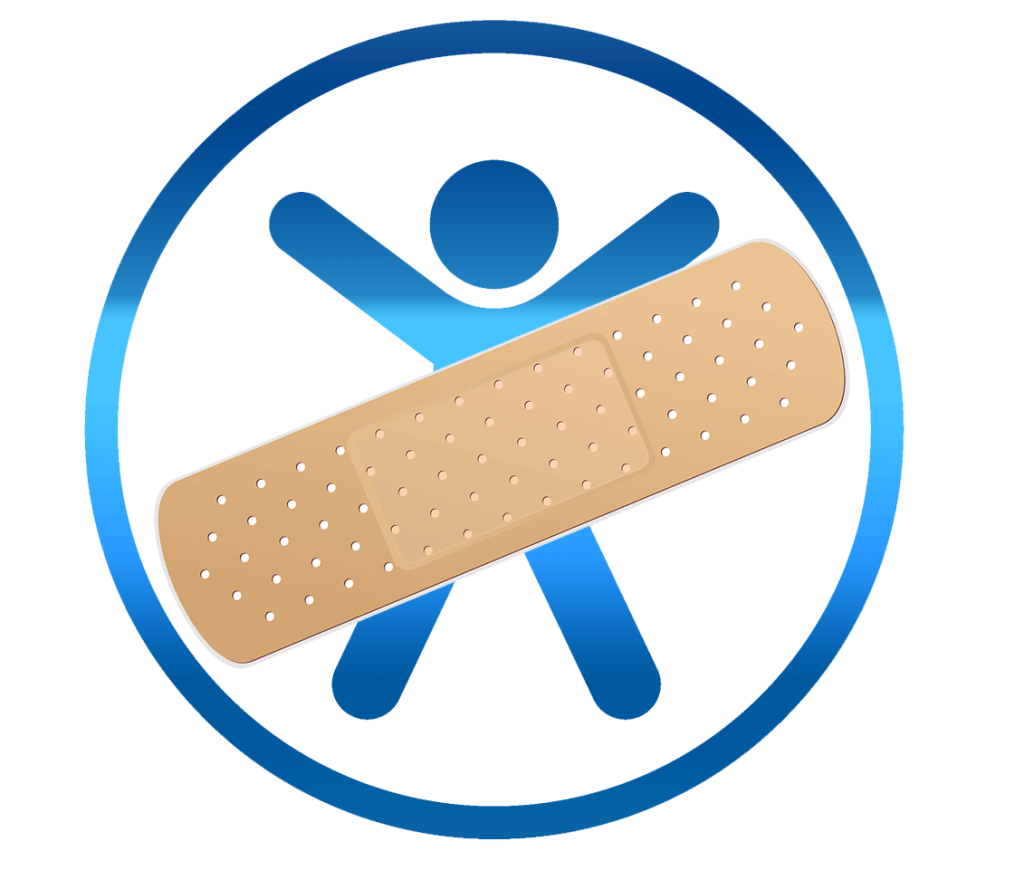 We’ve talked to many businesses, hospitality website owners, e-commerce website owners who were as shocked as you probably are.They didn’t even realize they were not following the ADA law – same law that applies to buildings – Title III of the ADA for public accommodations. So now, the scramble begins to learn more and find a solution to a problem they didn’t know they had.

A few of the questions we have received about ADA and accessibility are below.

If I just add alt tags to images, will that make my website accessible?

Alt tags on images is a small part of accessibility. Knowing which images require them, which ones should not have alt. WCAG 2.1 is the International standard for ADA, and Section 508 and has over 50 requirements to be met.

Of course! A lot of what is needed for a website to be accessible is done behind the scenes. There are things your designer should be aware of when making color and text choices so there is enough contrast. But for the most part, unless a person is utilizing the accessibility features, the changes will not be seen by those who are not using assistive technologies.

Our developer doesn’t know WCAG 2.1 guidelines or how to implement them, can you help our team?

WCAG 2.1 has over 50 standards in four sections – Perceivable, Operable, Understandable and Robust. There are four different levels of compliance, A, AA, and AAA. It’s a huge amount of specialized knowledge needed. Most developers we’ve talked to do not have the needed knowledge nor time to learn it all.

Is an accessibility plugins and overlays all I need?

Automated scan tools and accessibility overlay tools are great tools to start with. To fully audit and be fully accessible, a manual audit using the assistive devices disabled persons use, such as a JAWS screen reader, must be performed. This reviews the use of the website for those who only use a keyboard, or voiceover, head and mouth pointers or other assistive devices. Additionally, documents such as PDFs must be accessible. A manual audit of the documents is required. There are other requirements to be met such as adding your accessibility policy to your website and a way for those who have an accessibility complaint to contact you.

Disabled people are not part of our target audience. Why should I be concerned?

There are over 60 million people in the United States who have a disability. They are spending over $15 billion on products and services across the Internet. The chances that yours is one of these is pretty high. A study shows that 71% of disabled customers with access needs will click off a website they find difficult to use. Show them you value them and their business by providing barrier-free website experience.

I don’t have a storefront, just a website. Do the ADA laws apply?

The ADA defines a website as operating “a place of public accommodation.” There are 12 different types of public accommodations this statue lists but the one that encompasses most websites is “other sales or rental establishment.” When the Act was passed in 1988 and signed into law in 1999, the Internet was not what it is today.

If you have a brick and mortar store, your website is an extension of that store and so are the requirements. For those who do not, you’re still under the ADA because of the way the guidelines were originally written to include reasonable accommodation. The lawsuit against Blue Apron.com and NetFlix illustrates this ruling.

We can work with you or your internal IT team and your legal counsel to make sure that all stakeholders understand the requirements of full digital inclusion under the ADA laws and Section 504/508.

Schedule a convenient time to discuss your needs.  We will review your goals with you and determine if an Accessibility Audit is the best solution for your business as well as the best options for remediation and ongoing methods of keeping your website accessible. 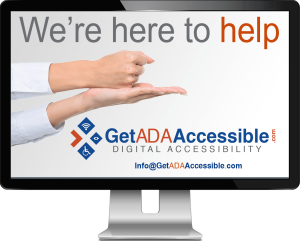 Receive Accessibility Tips in Your Inbox